It seems that the Samsung Galaxy S10 new has a serious security hole when using it with some accessories from third parties. You know for that gap and why and how avoid if you are a user of the device?

The problem occurred when the use of protective screen “Screen Protector” from a third party through ebay, it would enable someone to unlock your device via reader fingerprint device built-in screen which is supposed to be more places confidence in the Secure device and the need of sensitive information, especially payment applications.

The deployment location of The Sun in the UK a report indicating that the old woman 34-year-old said that her phone Galaxy S10 learn to hack by any person by finger prints only! Although the fingerprint is registered on the phone.

The problem seems to come from the cover to “Cover” a cheap price is of the kind that comes like a bouquet of any silicone shell for the back of the protective screen also. He said they have been getting this cover from eBay at a price of 3$ almost.

After a while I discovered Ms. it’s possible for someone to exceed the lock screen and access to banking and financial applications sensitive.

Ultrasound is the reason 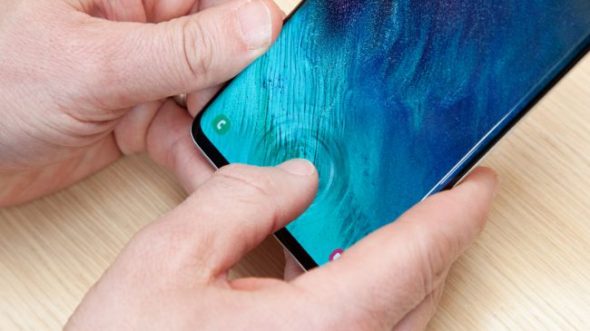 It seems that the problem is linked to the report of the ultrasound that you use the Samsung to read the fingerprint in the screen. Because the technique does not fully comply with the protective screen glass is solid, turn the manufacturers to use the screen protector gelatin non-steel.

But it seems that screen protectors gelatin also has problems with the Reader Prints; as we know that our fingers leave traces on any screen or something touched it, but they seem to be recorded strongly in the protective gelatin; Here Comes the role of the defect in the ultrasound system where the capture fingerprint printed on the screen protector and not the actual injury, and perhaps another problem occurs, namely that the overlap is not reading the prints correctly, which means that anyone can open the device.

While it was discovered vulnerability on Samsung Galaxy S10, it is believed they could exist on the other phones which operates with ultrasound. But of course this does not mean that all the “Screen Protector” by this defect; but in the end found some of the species may be in your phone.

Said Samsung for their part, they achieve in this matter, and recommends the use of certified products of Samsung only.

Point is calculated for Apple TV

This problem is fold a good example of the reason for the company’s decision not to enter the field of reader and fingerprint built-in screen (at least in its current form) and the imprint face of Face ID on its devices modern. And they don’t use to ask those techniques even include all images related to it from the reliability, security and effectiveness of the devices.

Have proven fingerprint authentication Face ID it is more secure than fingerprint authentication systems, facial recognition and other. This is because Apple uses a sophisticated set of sensors to create a three-dimensional map accurate to face the user and does not depend only on the two-dimensional image. Of course, it may happen that identical twins or the content they design the faces of three-dimensional that they unsealed them, but in the end are exceptional only if there looks just like you and your or who can spend more than the price of the phone to create a model of the form of you.

Have you come across someone who has the same problem of the prints mentioned in S10 etc.? Tell us in the comments.

Facebook launches a separate tab for shopping through its app