It is known that the Facebook Messenger in addition to WhatsApp they are both the same American company and we talk about Facebook which is one of the upper American technology companies.

And of course there is used the two applications to communicate with family and friends and the rest of the contacts to the other, and from there wishes to use to apply one of them to avoid dispersion and waste of time in the chat.

We want to use WhatsApp or Facebook Messenger but not both, the question of who is the best? Through this comparison you can choose the best for you.

Both applications are owned the same company means that your data on its servers in the end, but WhatsApp compared to Facebook Messenger is the best on privacy level.

But this fact will change next year 2020 when it is the unification of the messaging system in the two applications so that you can chat from WhatsApp with your friends on the messenger and vice versa.

I don’t know whatsapp no ads unlike application Messenger that displays messages and announcements in the story also, but this also will change this year when you include Facebook advertising in the story on WhatsApp.

Prefer to make calls via WhatsApp because it lets you make calls even in places where signal strength is weak.

Works WhatsApp seamlessly on 3G and Wi-Fi and even شبكات2G at the same time, the longer the contact the better the Messenger, especially when you need to contact 50 people, allows you to WhatsApp and start a group call with more than 4 people.

Calls Messenger high-quality is other but it is expensive the more data the app is larger than WhatsApp itself.

Rubbed application WhatsApp limit to the number of pictures that you can send, no limit on Facebook Messenger, are integrated Messenger well with Facebook that has the ability to recognize the contents of images which are exchanged thanks to the artificial intelligence. 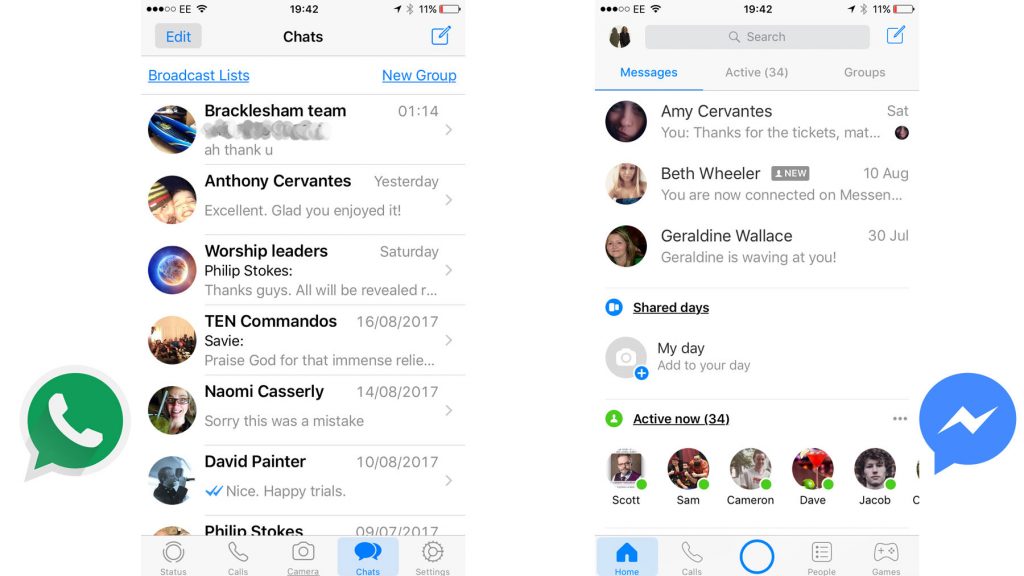 It’s a personal choice, but the design of the messenger a more modern design WhatsApp, possess the Messenger features such as gradients, which allows you to use multiple colors to customize the chat bubbles in the conversation to reflect your mood or the theme of the conversation.

There is also a “dark mode” which supports his messenger, unlike WhatsApp, which the company is working on adding it, as well as plans to build more representative of the modern.

On the other hand, it seems WhatsApp is simplified because it does not include a lot of other features such as games and plugin audio and to other advantages which can be accessed on the messenger, which received a new interface and streamlined focus on access to all the advantages simply.

Drag messages or delete them completely available, of course, in WhatsApp, has announced on Facebook that they will be available for the development of Messenger has been started provided recently.

Facebook announced that users will be able to delete sent messages up to 10 minutes after being sent, Will message from the sender in addition to the application of the recipient.

This feature is important currently where you can drag messages that you have sent by mistake, but still Facebook late at this level compared to Telegram, which offers to modify the messages sent and withdrawn even after reading it from the addressee.

The best games online multiplayer for the 2019

Best apps size less than 1 MB for your phone android

Google Pixel 4a are officially