Today launched the company Google experience two new using artificial intelligence to allow users of the site, using their knowledge of semantics and natural language processing for the transition to e-books, where the exploitation of technology developed the concept of artificial intelligence to promote its objectives, industry programs can understand the elements of human language and analysis.

Has Google has collected two experiences within one site and launched it the name of the Semantic Experiences which contains interactive tools to address natural language using artificial intelligence, and the site includes two experiments: a tool to talk to the books Talk to Books, play words Semantris.

The first experiment called Talk to Books is a completely new tool to explore the books you’re asking us a sentence or question to share for you about more than 100 thousand books with no dependence on the conventional method of matching keywords, where you can talk to the book and the answers can help you determine if you are interested to read or not, and are presented a sentence answer in bold, along with some texts that appear next to the sentence in the same context.

Think this possibility is unique and can help you find interesting books may not appear by the search keyword so as they are looking you inside the books about sentences, specific rather than words, as is the case in smart reply for Gmail, and if Talk to Books not found on the responses that you like, you may get better results by using different words or more words, often have a better experience with full sentences instead of key words only or short phrases.

As for the second they allow Semantris, which is a game to test your skills in vocabulary and connect words to each other and are backed by the same technology used in the tool Talk to Books, every time you enter a word, the artificial intelligence technology used for all the words in the game and what you think is more relevant to that Word, and because the technology of artificial intelligence has been trained on the text control trio that includes a great variety of topics they are able to do to collect as many words related to each other.

During the game Semantris, when the artificial intelligence team of the list is the transfer of the words most closely associated to the bottom, for example, if you were given the word “bed” at the top of a set of 10 words you might think that you should write the word “sleep” as an answer. And then it will be Semantris ten words and give you points based on how their assessment of the relationship tag between the words bed and sleep as compared to the relationship of the word “bed” with the words in the list.

The game can be played in a double version with the first version is the menu which has been called the Google of Arcade, and he needs to think and write quickly so you can collect a lot of points, and the second is the version of the book Blocks, which allows you to input the appropriate words to clear the books of the screen based on your assumptions associated with the words written on the colorful blocks.

It is worth noting that Google has developed to understand natural language dramatically in the last few years due in part to the development of the model word vectors which can be algorithms to identify the relationship between words based on examples of the use of language actual. The models vector these phrases and similar linguistic points near based on equivalence or similarity or correlation between ideas and language.

The renewal of such can Google demystifying Artificial Intelligence Technology and terminology such as machine learning and neural networks in a simplified manner to everyone, and applied in fact is easy and loved by users. 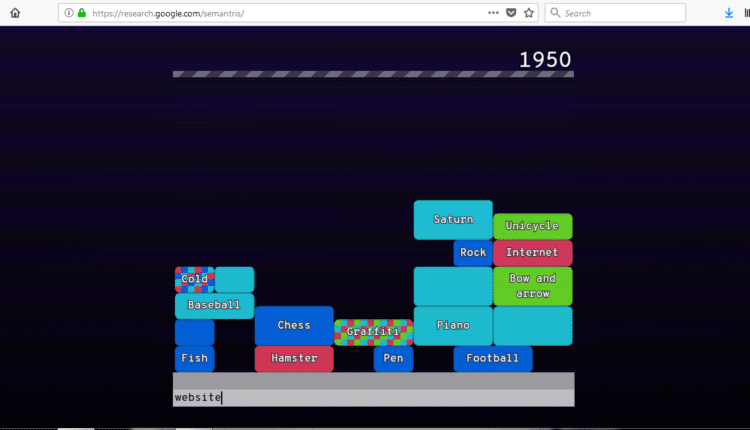 China has closed 13 of the cities due to the coronavirus, and a possible cause of the epidemic called snakes

Graphene batteries are finally ready to get smart phones