Not affected by the phones Galaxy latest designed extrusion that has affected the majority of phones of other companies, and remained the company’s distinct designs own frequently over the past two years, which made the sales of the Korean company decline significantly in the end of last year as explained by the financial reports the last.

So it was a must have for Samsung that change from their usual approach and start to match the competition that has become thinner annoying its market around the world.

This started to change at the end of 2018 the announcement of three new screens in different styles, they are infinity O and infinity V infinity U, and we have already seen Galaxy A8s (also known as Galaxy A9 Pro Travel International) with screen infinity O the end of last year, then the Galaxy M20 and M10 with the infinity screen O days ago, and now the news suggests to the advent of the Galaxy A90 camera with mechanical pop-up similar to those that appeared the first time in Vivo NEX S . 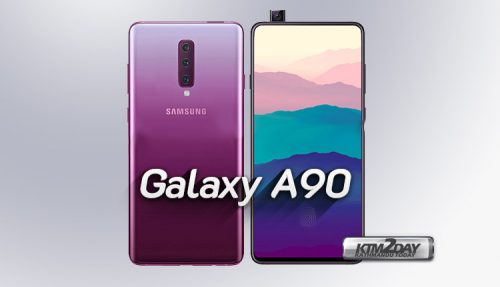 Expected to be the Galaxy A90 at the end of it a substitute for your (Galaxy A9 (2018, rumor says it will come with the memory access random 6 and 8 GB RAM, with internal storage of 128 GB.

And speaking of phone Galaxy A9 (2018) , which was released last November, this is the first smart phone comes with a setting camera quad in the back, which is equipped with a Super AMOLED screen measuring 6.3 inches, and large battery 3800 Milli amp, it would be inappropriate to issue a replacement new not so fast!

So we don’t expect to see the Galaxy A90 soon, where the focus Samsung is now clearly on the design of the screen hole and the identity of its new flagship Galaxy S10 .

Finally, the design of the camera pop-up double-edged sword in telephone, although providing much space in the screen, but the device remains vulnerable to the drive with the motor which drives the camera pop-up and again, you don’t get a phone with a camera popup on IP rating for protection from dust and water. If your Vivo NEX S mentioned above does not carry the IP rating .

0 Comments on “Leaks – Samsung is preparing to launch the Galaxy A90 camera popup !”

The officially join the club of companies a trillion dollars

What cryptocurrency exchanges are most often used by scammers?

Apple urgently needs to release something new. But what?

17 application harmful on Android, you must delete them immediately