In May of last year during the developer conference of its own announced Google first announced its plan to develop the Maps application Google Maps by use of the front camera of the phone with the techniques of augmented reality AR, although the demo was successful only that the idea was still under development, and now it seems that Google started to apply it on a wider scale.

According to the decision of David Perez of the Wall Street Journal, Google has already begun testing the integration of augmented reality with the Maps app through the phone’s camera, and became a new update available for a few of the local guides and people selected by Google to experience the new feature.

Upon the arrival of the next update, it will prompt you to the Google Maps application access to put en through a dedicated button or by raising your phone in front of you during the walk, then asked the program to move the phone in the office around you, even with respect to the surroundings, to compare it with GPS location data and the Compass.

The application will then enter the camera on the screen of your shares ranking that indicates your destination, while still traditional map is displayed at the bottom of your screen so you can see where you’re headed.

In this way you will be able to avoid previous mistakes when choosing the entry to the street, two adjacent or at the intersections of knowledge. 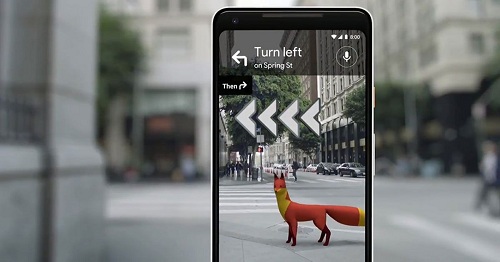 And on the safety of the users even don’t see people marching in the sail and hoist the phone in front of them, the new feature works for a limited time only, and if I continued to walk with lifting your camera in the street, the app will ask you in the end put the device down to save battery.

This feature is exclusive so far to travel on foot, and will not work if you ride a car or what have you, but we expect that Google is working to develop better in the future to clean cars and various development.

Twitter will not allow an absolute amendment of tweets published – here’s why!

Officially – Microsoft launches the browser to the Edge of the building on the Chrome for all platforms!

Get Windows 10 Pro at the lowest possible price ever – only$ 10 for a limited time!

Lunar dust can be a source of oxygen

30 application serious on Android phones must be removed immediately, you know, we have

Forecast: iPhone 12 size 6.7 inch will be thinner and longer than iPhone 11 Pro Max