Google has announced hours ago the update application assistant personal Google Assistant counterpart to Siri, which outperform it in all tests. The new update came to support Shortcuts feature Shortcut allows you to summon the assistant of Google and use it by the assistant of Apple’s “Siri”.

To activate the Assistant Google with tests Siri perform the following steps:

Download Google Assistant should note that the app is not available in stores, some states, including Egyptian and Saudi, but of course you can download it from the App Store months “American”.

Download the application shortcuts if you don’t have already.

Open the Assistant application Google and then press on the mark the bottom right will provide you the option to add to shortcuts for Siri, so by clicking it.

Now you will be prompted to add the phrase by which call Assistant Google. A basic phrase and months is Ok Google. 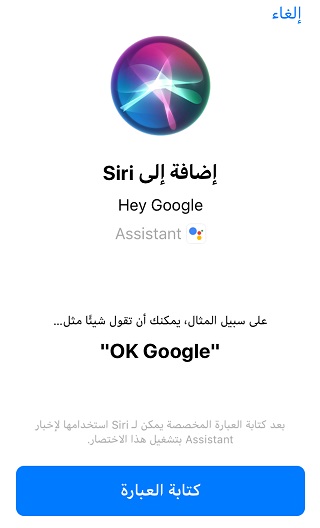 Now at any time you can call Assistant Google with Hey Siri-Ok Google and in seconds you’ll find Assistant application Google open and ready to listen. Any you can say the previous statement and waiting for two seconds, and then question Google to the app. Any like you ask Siri directly.

Have you tried by Assistant Google? And what do you think of it compared to Assistant Apple Siri? Tell us in the comments.

Do you add Apple’s Touch ID Touch ID for its smart?

How to add a photo to a new album after the iOS update 13.4

I finally found a worthy replacement for AirPower

How to become a NASA astronaut to fly to the moon and Mars?