After a few leaks interesting, revealed ASUS officially unveiled the phone, its new flagship Asus ZenFone 6 with the design of the camera’s unique battery 5000 Milli amp, the price doesn’t compare with the prices of the flagship phones!

The beginning of the first what distinguishes the phone is the Asus ZenFone 6 is the design of the camera possible which perform the role of front and rear cameras at the same time, the idea of close to the camera design Galaxy A80.

Cameroon background on the back of the phone is a mobile unit, a double is strictly the 48-megapixel for Main and 13-megapixel camera for the secondary wide-angle.

This camera is taking pictures like any rear camera, but when the conversion to take a selfie, the camera moving at an angle of 180 degrees and turn to the front camera situated above the screen of the phone, as we can see in the pictures.

Supports the camera on the ZenFone 6 4K video recording at 60 frames per second accompanied by install photo electronic (EIS), video slow motion with Full HD Full-HD at 240 fps and 120 fps.

Screen but a protrusion or a hole for the camera

Like new flagship phones, comes the Asus Zenfone iPhone 6 with full screen without protrusions or edges of the ticket, there are equipped with LCD screen measuring 6.4 inches by length-to-width 19.5:9 cover 92% of the front end of the phone!

Moving to the internal specifications of the phone, comes Asus ZenFone 6 with chipset Qualcomm leading this year, the Snapdragon 855, which is the same chip found inside the Galaxy S10 and LG G8 ThinQ, these slides with Random Access Memory 6 GB RAM capacity, internal storage 64 GB, and there’s also a version with a storage capacity of 128 GB, and the option to top with 8\256 GB, and each version supports a memory card up to 2TB.

Comes Asus ZenFone 6 with Android 9 Pie straight from the box, it is compatible with Android software Q Beta also, you will get the update immediately released officially.

The phone comes with sensor fingerprint material in the back, and a headset 3.5 mm, the key to intelligent and dedicated by default to the Assistant Google, but can be re-assigned to open the camera app.

Support Asus Zen iPhone 6 4G LTE and my connection, as well as revealed the leaks before the smartphone includes a huge battery capacity 5000 mAh with support for fast charging 18-watt. 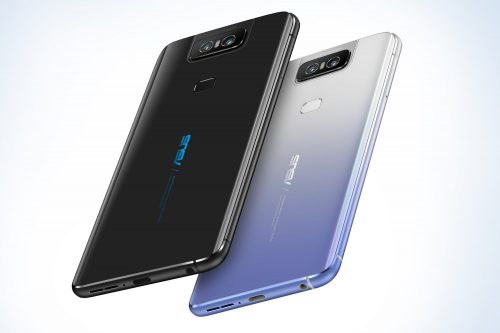 The colors of the Asus Zen iPhone 6

The price and availability of Asus Zen iPhone 6 :

Device Asus Zen iPhone 6 available for pre-booking in the number of states in Europe and the United States in two colors are black and silver, will start in market access on May 25.

The appearance of the first information about the phone next gaming, Asus ROG Phone 3

Apple to invest $ 330 million USD in the factory for MicroLED, according to a new report

The user flew to Hong Kong to find the headquarters of Bitfinex, but couldn’t do it