Started the latest version of the application Facebook Messenger access for all users after receiving the comprehensive changes to the level design. This is good news, if not from the users of the lucky ones who got their update during the months of September and October the last two.

The story of the new design of Facebook Messenger

Considered the application of Facebook Messenger one of the most popular apps of the conversation at all, exceed the number of users billion users per month. In the month of May last year, revealed Mark Zuckerberg during the Facebook F8 developers Developer Conference about a completely new design to develop a Faceook account Messenger.

The new update is mainly intended to make the interface use more simple with the removal of third-party elements task and focus on the characteristics most important to the user.

In the new design was to reduce the number swell to 3 tabs: tab talks and Chats, the tab contacts People, tab discover Discover featuring games, apps and ChatBots. At the top there’s still a search bar and the “Strories” your friends. 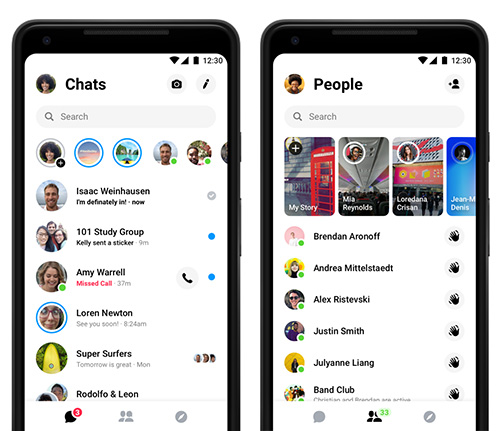 The new design of Facebook Messenger is launched within the new update in addition to other improvements in performance. During the coming period, we will update your app automatically through a server update branch or via the Google Play Store or app store in your country, and this, of course, if you haven’t got it previously.

Other benefits expected also within the application Facebook Messenger feature Night mode Dark Mode which switched the background of the application white to the other black to reduce eye strain during the night and reduce battery consumption. This property is currently tested as a prelude to expelling them soon.

WhatsApp will not allow you to forward messages to more than one person anymore!

Is there a relationship between the networks of the fifth generation and Corona?!

The application of a relay of the news – see the latest news of world and local numbers and statistics to MERS-CoV in these troubled times!

How to make an old face for Android

How does the spread of MERS-CoV on the industry smartphones?

Do I need to buy a new iPhone or you can buy used ones?