After a year full of by extrusion similar to the Evo X, looks like we’re in the process of new trend in the design of the screens of smart phones but this time Samsung and Huawei.

Earlier in 2018 launched the Samsung Infinity-O, which represents the circular hole in the upper corner of the screen where you can put the front camera.

We saw already in the Galaxy A8s , and then Huawei nova 4 , and honor V20 , and it is expected that we see in the Galaxy S10 next month too, and now appeared to leak New know join Nokia phones to class. 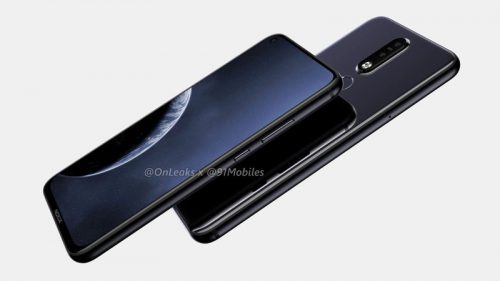 According to the latest leaks from the site @onleaks the company HMD Global run on Nokia phone new will carry the name of Nokia 8.1 Plus with the design of the camera within the screen, and the pictures about the design of the new phone with precise edges and a front camera and one in the upper left corner using the inside of the hole in the screen of the phone that will come the size of 6.22 inches.

We can also see setting up rear dual camera with sensor fingerprint under setup, camera, and provides us the video of your @onleaks that the phone will have a headphone port of 3.5 mm connections USB Type-C will be part of the Android One also.

Grade – Shawty Get patented dual-camera inside the screen!

The deal – the first appearance of a live phone Lenovo Z5s with a hole in the middle of the screen!

Sony announces the integration of phone sector with all of the sectors of camera, Home Entertainment

Sony will consolidate the partitions phones, cameras, and home entertainment to form one section unified

How do you get to design the notification area of your one OneUI on any device? And how to allocate it properly?