With near the official announcement of the Note X of Samsung confirmed the news about the launch of the Korean company more than a phone under the name Galaxy Note 10 . Until now the leaks about the telephone and 5G there are some possibilities for the phone’s version is a third smaller, such as Tri-Galaxy S10 .

These leaks of sensitive OnLeaks famous on Twitter who drew the final form of the expected phone Galaxy Note 10 days ago, and now he has published his forecast case Note 10 Pro.

As we can see from the picture at the top doesn’t Galaxy Note 10 Pro from Note 10 in the general design a lot, all phones come equipped with a hole screen for the front camera in the middle of the screen, but the difference obviously would be in the rear camera and the world.

It is rumored that the Galaxy Note10 will come with a screen of 6.3 inches while the Pro version will include a larger screen size of 6.75 inches with the same resolution for each monitor, but may vary the battery capacity.

For the rest of the specifications of the External all the two phones are identical, the power button on the left and USB-C at the bottom and there’s no headphone port 3.5 mm .

The launch date of the Galaxy Note 10 :

Samsung has launched the phone its possible to Galaxy Note 9, on 9 August last year, so it will not be surprising to reveal to the Korean company for NOTA 10 at a date close to this year also.

The latest reports coming from South Korea that the launch of the Galaxy Note10 will be on 10 August in Korea, and Samsung detects two phones in the series Galaxy Note – vanilla Note10, and the Note10 Pro. 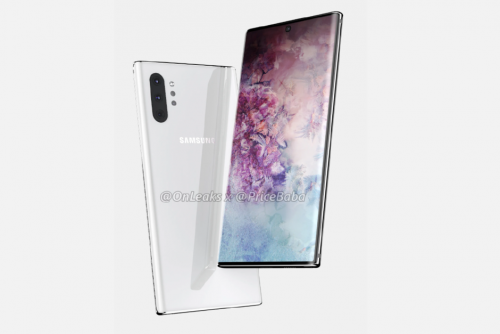 Has been thrown Galaxy Note9 in the markets on August 24 of last year, so it is likely to start the Samsung sales binary Note10 as of August 25 if launched two phones on August 10.

The security hole made phones Galaxy permeable since 2014

Interface Samsung One UI 2.1 begin to cut their way for Galaxy S10 and Galaxy Note 10

Why users are so irresponsible attitude to their passwords?

In Beijing, there was a violent seizure of the office Bitmain former CEO of the company

Report: Apple to delay the launch of the iPhone 12 due to Corona