Since more than a quarter of a century with the advent of the mobile phone featured SMS service, then the development time and began the era of the internet and smartphones and instant messaging applications such as WhatsApp user Viber and other software that is based on the instant messaging service of IM, and now we are on the heels of the second decade of the third millennium requires operators and manufacturers of smart phones to a new technology that will change the future of communications may cancel any communication currently known.

This new technology known as RCS, a test of phrase, Rich Communication Services, a new standard has been adopted from the GSM Association, as they represent the new generation smart services SMS and MMS but the language of the Times.

The difference between the RCS and messaging services traditional?

Full system RCS to a great extent instant messaging system that chat apps modern, offering a range of features, including sharing photos and videos, and share location data and other information that can be shared across the internet, voice and video calls, see the status of delivery and if he read the other message you or not.

However, the technique of the RCS will not require the application works like WhatsApp or Viber like, but it’s supposed to be this technique is the application of the default message in the future, which will come preloaded with the phone.

Certainly what you’re thinking, dear reader, now, right, yes, there will be no more SMS service in its generally accepted now, perhaps it skips a lot of users of instant messaging applications for this kind of apps that they download is huge to connect with friends and individuals at work.

With the system RCS won’t need more than a phone number of the person you want to communicate with him, you will be able to communicate the immediate and extended via your phone through the messaging application traditional on your phone without the need of anything else.

Are the services of RCS available now?

Google recently began with the help of telecommunications companies in the payment services RCS in the new application for Android which will allow users to open and send their SMS messages that are received to their phones through the Web page and via personal computer, just like the service, WhatsApp Web is like, but the basis on which the application is running on here is the short message service on the phone. 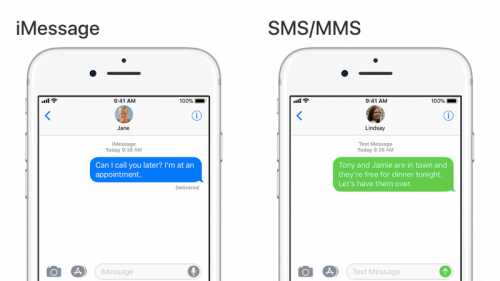 That new app that Google is working on its development will be invited in the first place the services of RCS for the future, it will replace the messaging app the default on Android phones, including not room for doubt about the arrival of services of RCS to all users in the near future.

Finally, it should be noted that some countries of the world began already in service support messages to the RCS, if you’re in Japan or North America and some European countries you’ll find the multi-vector support the RCS, as shown by Map of the distribution service at the top.

Apple TV also think about it ..

Reports currently that the Apple share with the international networks of a mobile phone the GSMA to ask the service of the RCS within the iOS system and its integration within Apple’s famous iMessage which will allow users of the iPhone and all the advantages of messaging services in RCS not only when messaging users phones iPhone other but also with users of Android.

Provide RCS on Android will put Apple under pressure with it on the iOS system and we will probably see service RCS with the iOS update 13 this year.

Apple warns of use cover webcam in devices MacBook

As the salaries of chief executives for months companies the technology?! This is what we know!

Built a solid technical.. “trust us,” published the results of the achievement for half a million students – Okaz Newspaper – newspaper Okaz

For the first time, use the technique of QR Code to help small business owners prevent the immobiliser – sunrise

Google developers said that will be new to Android 12

This game will make you suffer. A Civilization VI